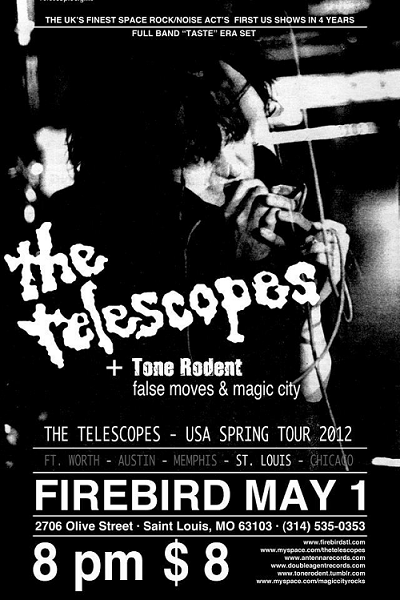 English space-rock heroes the Telescopes shared both a record label and a scene with bands like the Jesus & Mary Chain and My Bloody Valentine, but never shared the acclaim. And though the Telescopes are worshiped by modern noise makers as O.G. shoegazers, its influence hadn’t translated into a full band tour until now.

With one week of U.S. shows scheduled around Austin Psych Fest — including tomorrow’s stop at the Firebird — and band members borrowed from hard-working Texas bands, Stateside fans will have their first opportunity to catch the Telescopes at full power.

We worked out a quick interview with Telescopes’ singer and founder, Stephen Lawrie, and found him to be both friendly and playfully cryptic.

Jaime Lees: Your show here is in a week, have you made it to the States yet?

Stephen Lawrie: Yes, we’re down in Fort Worth rehearsing. We have the first show tonight. At Lola’s.

We are super excited that you’ll be a the Firebird. How did you come to set up a show in St. Louis?

Collin from Chatham Rise hooked us up with everyone.

I hear that you haven’t played a show in six years. How are you feeling? Are you nervous? Excited?

Last U.S. dates were six or so years ago. Totally different experience. We played free drone noise sets as a duo. This time it’s a full group experience.

How has your approach to songwriting changed over the years?

It changes every time I write.

Which bands do you consider to be your contemporaries, both past and present?

Everyone and no one.

What other music projects are you working on aside from the Telescopes tour?

New music with the Telescopes. I’ve been recording a lot with a great noise outfit from London called One Unique Signal. There are always collaborations with füxa floating around as well and I’m collaborating on a piece with Afgan, who work with our Antenna label.

You mentioned that part of the band are Texans, how did that happen?

We’re friends with the Cush from Fort Worth. They hooked us up with everyone.

I’m so in love with the idea and design of the flexi-disk postcards. How did they turn out?

Very nice thank you. It’s also available to download from the 28th. Through Genepool Records.

You’ve always had great hair. Do you have any styling / maintenance tips?

Who would win in a hair war between you and Ian McCulloch of Echo & the Bunnymen?

Who do you think is a bigger alien: Prince or David Bowie?