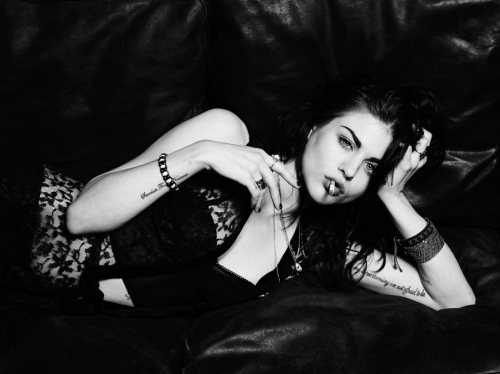 Frances Bean Cobain And The Other Nine Hottest Offspring Of Musicians
By Jaime Lees
Thu., Aug. 18 2011

​Today is Frances Bean Cobain’s 19th birthday. Time flies, right? In celebration of Miss Frannie, we’ve compiled a list of hot rock ‘n’ roll spawn. These people have at least one rock star parent and their moms are frequently models. (Figures.) They are all totally bangable, and many of them have their own interesting careers. Who do you think should be added to the list?

Frances Bean Cobain
Daughter of musicians Kurt Cobain of Nirvana and Courtney Love of Hole
Frances was on the “countdown to legal” list for many grunge fans. Now, at age 19 FBC has just posed for a collection of photographs that show that she’s all grown up. Eyes! Lips! Midriff! Décolletage! Tattoos! It’s all there, in this frequently topless but never outright scandalous set of photographs. Captured in dramatic black and white, “The Bean” looks absolutely smokin’. She’s sultry, she’s sassy and she looks like she’s either going to scream at you or make out with you or both. HOT.

Liv Tyler
Daughter of musician Steven Tyler of Aerosmith and scenester / groupie Bebe Buell
The quintessential foxy rock ‘n’ roll daughter, Liv first came to attention starring in Aerosmith’s video for “Crazy.” In the video, she played a pouty-lipped Catholic school girl who skipped school do naughty pseudo-sapphic stuff with co-star Alicia Silverstone. She’s since put her big lips on the big screen, with major roles in films like Empire Records, Armageddon and Lord of the Rings.

Sean Lennon
Son of Beatle John Lennon and artist / musician Yoko Ono
Sean is probably the most famous son of rock. Lookin’ like exactly half of each of his parents, the bespectacled musician doesn’t have to push his pedigree, it is already obvious in his pretty eyes and cute little mouth. Bonus: Sean seems nice, his music is good and he doesn’t disrespect his father’s legacy (unlike Lennon’s other son, jerk-ass Julian). And like a proper second generation famous kid, he has dated Mick Jagger’s daughter Elizabeth and also…

Bijou Phillips
Daughter of John Phillips of the Mamas & the Papas and model Geneviève Waïte
Young Bijou is a looker, but not really in a classic way. Her teeth are kinda weird and her vibe is kinda dirty, but these things somehow just make her damn sexy. She famously lost her virginity to Evan Dando and the hot little hippie has been banging famous dudes ever since. She was with Elijah Wood, then she dated Sean Lennon for years and now she’s engaged to Danny Masterson (aka “Hyde” from That ’70s show).

Zoë Kravitz
Daughter of musician Lenny Kravitz and actress Lisa Bonet
It’s absolutely shocking that Zoë Kravitz is good looking. Both of her parents are so. damn. hot. that it only makes sense that their individual hot qualities would get canceled out in war for gene dominance, leaving just a sad little unremarkable, unhot blob baby. Instead, the biology lottery resulted in Zoë becoming mega hot broad with a tight little body, her dad’s sense of style and her mom’s creamy skin. Yowza.

​Jackson Smith
Son of musicians Patti Smith and Fred “Sonic” Smith of the MC5
Jackson looks sweetly disheveled in that slightly scruffy post-hipster way. He plays guitar for his mom on tour and his good looks are a little distracting on stage- he has bright eyes and the same kind of quiet intensity that both of his parents pulled off in photographs. Also, he was cool enough to score Meg White of the White Stripes as his wife, which means the world might get a third generation of Detroit hotties.

Nicole Richie
Daughter of musician Lionel Richie and Brenda Harvey
Nicole was adopted, so she can’t claim her good looks from Lionel or Brenda. But she was adopted from the famous musical Escovedo family, and can count Sheila E. and Alejandro Escovedo as some of her close biological relatives. The doe-eyed former party girl has had public struggles with her weight and the law, but nothing obscures her natural good looks and funny personality. In the grand tradition of celeb spawn, Nicole dated DJ AM (Adam Goldstein) and is now married to Good Charlotte’s Joel Madden.

​Dweezil Zappa
Son of musician Frank Zappa and Adelaide Gail Sloatman
Just like his father, Dweezil is an acquired taste. His bright eyes are intense and surely one of the features that won over former girlfriend (and librarian glasses enthusiast) Lisa Loeb. Yeah, he seems like he can be kind of a douche, but that doesn’t cancel out his dark, almost John Stamos-y sexiness. Fun facts: Dweezil was an MTV VJ for a minute and has many musical credits to his name (including playing lead guitar on the the Fat Boys’ “Wipe Out”). He also had a bit part in Pretty in Pink as Andie’s friend Simon- this lil’ cameo automatically puts him in the Forever Hot Club.

Nicholas Des Barres
Son of musician Michael Des Barres and original groupie Pamela Des Barres
Best known as Murdoc on MacGuyver and the dude who replaced Robert Palmer in Power Station, Michael Des Barres has an interesting career as both an actor and a rock singer. His former wife, the beautiful Pamela Des Barres, is an author, a ginger and legendary groupie. Together they made Nick, who is tall and handsome with a striking blend of features from both of his parents. He’s also probably the most talented person on this list, finding success an actor, a writer and a designer.

​Ione Skye
Daughter of musician Donovan and model Enid Karl
Best known as Diane Court from Say Anything, the object of Lloyd Dobler’s affection won over teen audiences with her fresh face, crooked smile and quirky mannerisms. Basically, all straight men of a certain generation will always think that Ione Skye is just the hottest shit ever. She could have pretty much any dude she wants, but Ione keeps up the tradition of inter-industry dating: she dated Anthony Kiedis of the Red Hot Chili Peppers, she was married to Adam Horovitz of the Beastie Boys for a few years and she’s now married to musician Ben Lee.