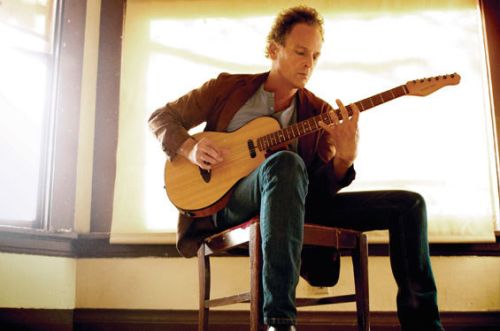 Lindsey Buckingham is known for his love life just as much as he is known for his talent. This distinction is common for women performers, but it’s rare among men. As the guitarist and male lead singer for 1970s sunny Cali-via-London megagroup Fleetwood Mac, the curly-haired Buckingham sang and wrote boatloads of amazing, now-classic songs, all while making up and breaking up with bandmate Stevie Nicks. But guitar virtuoso Buckingham is still in the business, and he’s still on tour, having released his latest album, Seeds We Sow, just last year. Buckingham has now fully grown from a man defined by one relationship to one who is defined wholly by his talent.
Warning: The dude wrote “Go Your Own Way” and he’s still very good-looking. Keep an eye out for swooning, squealing, overheated lady baby boomers at the show.

I’m just going to come right out and say it: Stevie Nicks must have a magical coochie. That’s all I could think about last night while watching her perform at the new Chaifetz Arena. That isn’t to discredit her ample musical talent, but her feminine gravitational pull is apparent, even in a large music venue. She’s got that something. And whatever it is, it’s magnetic and irresistible.

Over the years her lady parts have served her well: the source of most of her song writing material has come from her love affairs. Most of these episodes were well documented, even in the pre-paparazzi days of 1970s celebrity. Successful rock-and-rollers lined up around the block back in the day for a crack at Miss Nicks. She supposedly gave quite a few of them a spin, from Don Henley to Mick Fleetwood to Jimmy Iovine, and her long relationship with uber-sexy band mate Lindsey Buckingham was a main topic in Rumours, the classic Fleetwood Mac album.

Even now, at the age that most people retire, Nicks still knows how to work it. She’s still all high-heeled platform boots, gothic Lolita dresses, long blond mane and sparking shawls. Her static, uncompromising image is shockingly stubborn. Imagine a ’70s punk who still sports a mohawk as an old man on the golf course. Still, Nick’s image doesn’t feel contrived- it’s just as if she found a good thing an stuck with it.

And the fans? They love it. When she opened with “Stand Back” one would have never known that the arena was only about half full, as every older lady in the place got up out of her seat and cheered while mentally reliving her glory days.

What followed was a string of hits (including “Dreams,” “Rhiannon,” “If Anyone Falls in Love,” “Sorcerer,” Gold Dust Woman” and “Landslide”) and a couple of surprising covers (Bob Seger’s “Face the Promise” and a torturous version of Dave Matthews Band’s “Crash”).

To her credit, Nicks basically excused these covers by explaining that she and her band need to do something fun every now and then. By “fun,” I’m guessing she means “sing a song that I haven’t already sang 873,421 times in my life.” It’s cool. She’s forgiven for that. She is still under the gun, however, for one part in her stage show.

There was a huge video screen behind the stage that showed mostly innocuous, appropriate swirling art (a rain shot during “Dreams,” a yellow haze during “Gold Dust Woman,” etc.) but during “Rhiannon” it featured a pair of cheesy white unicorns frolicking in the freaking forest. I shit you not. It was distracting and I laughed for nearly the whole song with sympathetic embarrassment for everyone on that stage. Lest you think I am a cynical party-pooper, those unicorns garnered snickers from quite a few people near me and pretty much ruined the song for us all. Lose the unicorns, Stevie, that’s pushing the “mystical” and “enchanting” thing just a little too far.

This was the first “rock concert” hosted at the Chaifetz, and aside from the poor attendance (due, no doubt, to the high ticket cost), the management can certainly call it a success. The place is much smaller than an average arena, creating a cozy feeling even at a big show. It’s a clean white space accented with SLU blue, but it doesn’t feel cold, just new. There were helpful ushers, food and drink and a kind employee even offered to escort me to my car. Yes, the parking situation is kind of wack, but you’ve dealt with worse. There’s just nowhere to park that feels close. I paid $10 and went for the SLU garage. It was a bit of a hike from the garage to the arena, but it’s nice scenery with small ponds, bridges and sports fields to watch along the way.

During her time as a member of Fleetwood Mac, Stevie Nicks filled many roles: singer, songwriter, muse, tambourine player and main hottie. As a contributor to the Mac’s legendary Rumours album, Nicks sealed her place in history as one of the great original rock & roll heroines. After penning some of the band’s biggest tunes (including otherworldly classics such as “Dreams,” “Rhiannon” and “Landslide”), the 60-year-old went on to enjoy a successful solo career, scoring hits with songs like “Edge of Seventeen” and “Stop Draggin’ My Heart Around”. These days Nicks is still working the witchy hippie thing, what with her suede boots, shimmery scarves, untamed mane and trademark twirling dance moves. Her infrequent tours command top dollar, as Miss Nicks is still a powerful performer who has grown into her delightfully distinctive voice.