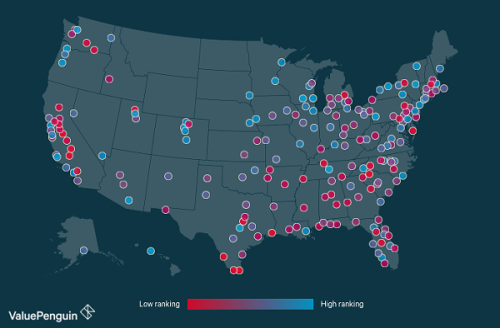 According to a recent report from consumer spending website ValuePenguin.com, St. Louis is ranked as the 42nd best city in the United States for music fans.

I’d never heard of Value Penguin, so I knew not to trust the results. What is a Value Penguin, anyway? It sounds like a new mascot for Aldi discount supermarkets. Still, in the little preview photo that I saw, it showed my beautiful city as “high ranking” (with a bright blue dot) so I expected us to be #1. I clicked over to bask in the warm glow of rocketing civic pride.

I glanced at the very top of the list and didn’t see St. Louis. I scrolled on down to #5. Still no St. Louis. By the time I got to #10 and didn’t see the Lou I knew that this list was crap and that Value Penguin was populated by morons.

The rest of the nation might concede that Nashville is country music city, but that’s about it. I knew a guy who was an audio engineer in Nashville for a decade and he said that 95% of the studio recordings that get done there are either country or Christian or both. He was so starved for any version of rock & roll that he almost cried tears of joy when he was hired to work on a Paramore record. Yes, Paramore, that “band” that consists of one marginally attractive Hot Topic employee and whoever they pay to stand behind her while she grunts and fluffs her hair. That’s what passes for rock in Tennessee. No thank you.

I skimmed farther down the list and finally saw our ranking. Ah, #42. They say that 42 is a special number and that it’s the “answer to the ultimate question of life, the universe and everything.” I knew we were magical.

I also noticed that a city in Florida is a whole eighteen slots ahead of us. Florida? Florida is only good making the rest of the country feel smart. The only decent music that ever came out of Florida was from Tom Petty and he got the hell out of there as soon as possible. I feel so bad for music fans in that state. Its biggest stars are Marilyn Mason, Aaron Carter, Pitbull and Limp Bizkit. You poor, sad, floppy dick-shaped peninsula.

Value Penguin used fifteen categories to piece together this whack-ass list, each with their own weight and specifications. Cities were scored based on their performances in various arbitrary contests. Some of the categories made sense (how many record stores per 1,000 people) and some of them made use of wild card factors like the average amount of days with precipitation per year, average closing times at bars and the percentage of population using public transport to commute.

Yes, any of these things could influence the lives of music fans, but so could literally thousands of other factors. And as a statistics professor once taught me, correlation does not equal causation. You don’t have to be a numbers geek to see that this methodology is, at best, an elaborate game of pin the tail on the donkey.

A good music city looks a lot like St. Louis, thank you very much.