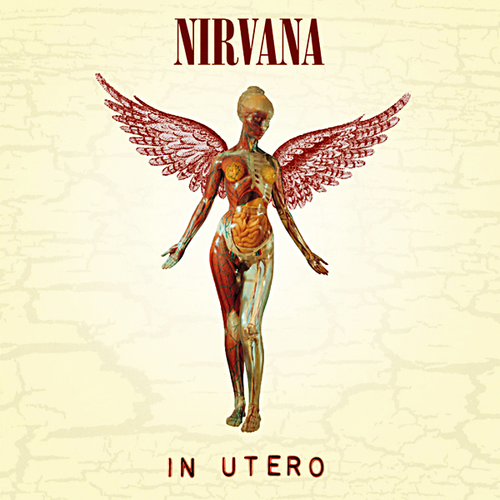 Today marks the re-release of Nirvana’s In Utero. The album recently turned twenty years old and this milestone is being celebrated with the release of a “Super Deluxe Edition.” The new edition offers remixes, demos, compilation tracks and rare, previously unreleased tracks, but we wanted to take a look back at the original twelve songs recorded by core Nirvana members Kurt Cobain, Krist Novoselic and Dave Grohl in 1993.

In Utero was a polarizing album. After gaining sudden world-wide popularity with the release of Nevermind in 1991, it would be an understatement to say that Nirvana’s second major label release was highly anticipated. The whole planet seemed to be paying attention and expectations were not entirely positive. People were waiting for Nirvana to flop, or to deliver Nevermind Version 2.0, but what came from the band was unexpected and brazen.

Because of sheer exposure, Nevermind was for everybody. But the songs on In Utero were a sharp departure from the pop tinged anthems that made the band popular. In Utero was louder, weirder, an artistic statement. To release an album with a combination of beautiful dirges mixed in with such a heavily corrosive rock sound was, well, ballsy.

From the off-kilter, screeching beginning of the first song, “Serve the Servants,” it is clear that the band was doing something different. And while Nevermind was written and recorded in relative obscurity, most these new songs were put together under while under the intense focus of an international microscope.

Main songwriter Cobain was keenly aware that his every word would be dissected and examined with medical precision, and many of his lyrics here are preemptive rebuttals to criticism, almost post-modern in their self-awareness. (The opening line of the album is “Teenage angst has paid off well / Now I’m bored and old” and “Tourettes” begins with the spoken phrase “moderate rock.”)

Many of the classic Nirvana lyrical themes like personal dissatisfaction and family trouble continued to pop up on this album. But after a few years in the spotlight, Cobain also seemed eager to explore the topic of his own public persecution, real or imagined. His words felt more aggressive at times (“You can’t fire me because I quit”) but he also seemed to ask for mercy, expressing his own vulnerability and fragility (“Cut myself on angel hair and baby’s breath”) throughout the album.

Cobain always claimed that with Nirvana the music came first and the lyrics were secondary– that they were almost an afterthought. Not buying it, Mr. Cobain. The lyrics here that might at first read as obtuse or purposefully nonsensical eventually morph into brain poetry, exposing the deeper meanings hidden in the phrasing. (“Bi-polar opposites attract / All of a sudden my water broke”)

Because Cobain committed suicide less than a year after this albums release, it’s tempting to go back and read all of his lyrics as deep and autobiographical, but to do that is to discount Cobain’s storytelling skills. His words are clever (“If you ever need anything please don’t hesitate / To ask someone else first”) and he was adept at using cultural references as a jumping off point or metaphor for another topic. (“Frances Farmer Will Have Her Revenge on Seattle”).

As far as history is concerned, Nirvana is Cobain’s band. And that’s not just because he’s the idolized dead guy, he’s considered the driving force behind the music. Nirvana was shaping Cobain’s public reputation, and he knew it. And though he claimed to be deeply uncomfortable with his newly appointed “Voice of the Generation” title, Cobain still used his powers for good– pushing pro-woman, pro-choice and pro-gay values in interviews and liner notes. He was also acutely aware that he was perceived as a sell-out, another title that was offensive to his punk rock heart.

With this in mind, Cobain hired Steve Albini, the legendarily difficult no-bullshit engineer, to record In Utero. For a band concerned with its street credit, Albini was a step in the right direction. Albini is not only is the guitarist for original alt-rock heroes Shellac and Big Black, in his studio he uses ancient machines and records to tape. He is known for recording not just cheaply and efficiently, but also for imparting a certain nebulous honesty to his products. (Some of the songs on the album were also mixed by long-time R.E.M. producer, Scott Litt, but Litt’s contribution was downplayed in favor of highlighting Albini’s involvement.)

The album introduced unsuspecting Nirvana listeners to a whole new sonic palette. In the damp, dark sludge-fest that was the Seattle scene, Nevermind was a cute-sounding, almost child-like release. It was an album full of rhymes and hooks and sing-alongs, really. With In Utero, Nirvana seemed determined to prove that it could out-grunge the grunge-sters. The sound is abrasive. The drums are relentless, the guitar frequently feeds back and Cobain howls like an injured animal, all bitterness and bile.

At the time of its release, In Utero seemed to be a dare to the listeners. Songs like “Scentless Apprentice” and “Tourettes” tested their endurance for chaotic, grinding expression. It was as if the popular band was saying, “Oh yeah? You liked Nevermind? Well, here’s In Utero. Do you still like us?” As a whole, the album sounds like a defiantly bold statement for a band that was so well-known. Even now, 20 years later, In Utero still stands as a piece of art and a proud, defining bookend for a troubled, yet brilliant band.