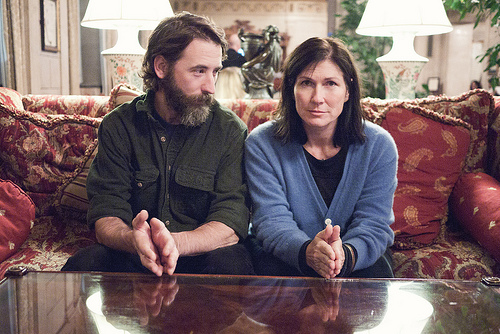 Attention: Kelley Deal is Playing A Show Tomorrow At the Crack Fox with Her New Band, R. Ring
By Jaime Lees Fri., Jul. 13 2012

Kelley Deal endeared herself to St. Louisans a few years ago when she chose to film the video for the Breeders’ single “Fate to Fatal” with our roller derby team, the Arch Rival Roller Girls. The video was populated entirely by locals — both on skates and in the audience as extras. Since the filming, Kelley’s sister (and fellow Breeder) has been busy with her other band, the Pixies, and Kelley has joined up with Mike Montgomery of Ampline (and Candyland Recording Studio) in a new duo called R. Ring.

This is a lo-fi project, with both Deal and Montgomery singing and playing acoustic guitars. Montgomery mostly sings as back up to Deal’s familar angelic voice and together the two R. Ringers create songs that range from muted to psychedelic, but always sound personal. It’s a sweet little folk act, but with all of the excellent weirdness and uneasy chaos that permeates Deal’s other musical endeavors. Basically, if you’ve ever wanted to know how Kelley Deal sounds when she’s singing in her living room, this is your chance.

R.Ring – Fall Out And Fire from Be Lie All on Vimeo.