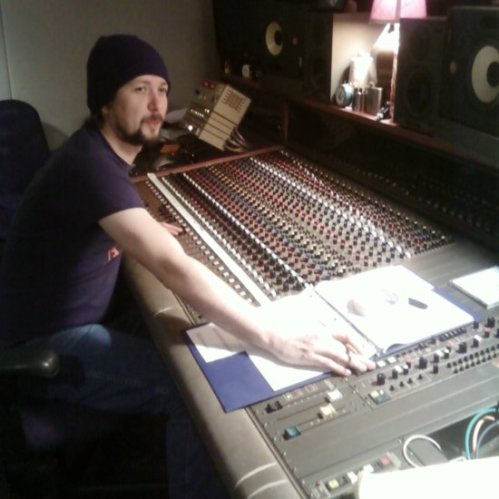 We get very excited when there is a new recording studio in town. With each new studio comes the promise of new batch of local releases, so we checked in with Gary Copeland of the minty-fresh South-Fi studio for a glimpse of our future. Copeland gives us all of the important details.

Jamie Lees: Would you please describe your history with the local music scene?

Gary Copeland: I moved to the city about fifteen or sixteen years ago from Illinois. I played in bands and projects (Lofreq, Shame Club, Head on Collision, King City Pinks) around town for a number of years. I worked as the front of house engineer at a few clubs and recently left my last position as head engineer for a club in January.

Why did you want to build your own studio?

I’ve been interested in electronics and specifically recording for as long as I can remember. I’ve always liked working with my hands and started teaching myself about things that tied into those interests since I was a kid. It mostly came out of necessity. My family didn’t have a lot of money, so if you needed something done, you sort of had to figure it out for yourself.

It came about from the process of gathering equipment to make demos for my own projects. At a point, I realized I had enough gear to make actual records. Combined with the fact that I really like and am excited by the whole process that is involved, I started asking around to see if my friends would be interested in working with me.

Is the studio a part of your house or is it in a separate location?

It was in a house in south city for about fifteen years. The landlords there were just about the greatest people you could ask to be renting from. They let me do pretty much whatever I wanted to the place. I slowly built it into a pretty decent place to make records. By the time I moved out, the studio had more or less taken over the entire place. These things tend to get out hand.

Around July of last year I got an email from Justin Fisher at Smith Lee in Maplewood about an MCI JH110 he wanted fixed up. He had heard about the JH24 I was working on at the time and wanted to see if I would be interested in getting his machine smoothed out.

We worked out a deal and got his machine working really well (with help from a great MCI tech in Nashville named Steve Sadler). During the process, the idea of me moving into a control room they had open there came up.

Did you use any other studios as inspiration when designing yours?

Not really. Since I moved into a pre-existing, professionally designed, working space, there was no need to do a lot of remodeling type stuff.

The only thing I do require from a space is that things work properly and it’s a comfortable, homey kind of environment. Which it is. I really like being there and am very honored that they would allow me in. The building has so much history, and I can feel it all around. I’m starting to think the place is haunted though.

Do you have a specialty? Any certain equipment or qualities that bands might be seeking?

I use MCI gear here. I have a ’79 JH16 two-inch machine with 24 and 16 track head stacks. There are a few different vintage JH110 two-track machines to mix to, and I am currently putting together a sort of “mutt” JH110 that will be my permanent mix machine when finished.

My console is a ’81 JH636 that used to be Smith Lee’s. They retired it years ago and put it in storage. I rescued it and worked on bringing it back to life this summer and fall with lots of help from Steve. It’s working quite well now and is just an absolute pleasure (in my opinion) to make records on. It just makes so much sense to me and sounds fantastic.

Most of the outboard stuff I have here is either stuff I’ve made, racked, or just “tweaked” in some way. I’m always listening and looking for new stuff, but I also have to balance sonics and overhead to keep the output sounding great, but keeping it affordable for clients. I’m definitely not getting into some kind of silly “arms race” with the other studios in town.

I guess I would say my specialty more and more is analog recording, to make a long story short.

Who have you worked with and who do you have plans to work with in the future?

I just started a project with Troubadour Dali a few days ago on the two-inch machine.

Echo Bravo will be in soon to finish a record we started at the old place in Protools.

I recorded all the Glass Teeth stuff, although their drummer Mike Hanson mixed the full length CD they put out as their last release.

I mixed some stuff for Shame Club that they had recorded themselves.

I just tracked a new EP for Tilts. We actually had to do that at Jacob Detering’s Red Pill studio due to scheduling with the band and the fact that I was in the middle of my move. I really like working in his new room anyway.

I did The Hail Mary’s record (at the old Red Pill).

I also worked last year on a record for a band called Lengrand between there and my place that I thought was really cool, but unfortunately they broke up, so no one will ever hear that one. These things happen.

I did the Nevermores’ new record as well. I don’t think that’s out yet.

I have about three records of my own cooking currently, but I’m not really into pushing myself to finish those with all the other things going on right now. It’s great to not have deadlines sometimes.

John Katsafanas did a bunch of the overdubs for the new Black for a Second and Gubenthal records at the old place as well. Both of which came out great in my opinion.

I can’t really talk about anything in the future currently, but I will say that I’m really looking forward to this year.

Will you be focused on national or local clients?

So far at least, it’s been all local bands, which is totally fine with me. I would like to spread my “reach” out a little, but we have such a great pool of talent here that I wouldn’t consider it necessary. I mean, on any given day, there are probably one or two new bands or projects starting here.

I think St. Louis has an amazing atmosphere for creative people and would be a fantastic place for people from anywhere to camp out and focus on doing the work that is required to make a good record.

What would you like people to know about your studio?

I would like them to know that the place is here for them in whatever way they would like to utilize it. For example, if they have something they have been working on themselves and even just want to hear it in a treated, good sounding space, or whatever, they’re welcome. You don’t have to do your entire project here. I feel like I understand the position that most bands around town are in.

I would like them to feel comfortable in emailing or calling about anything really. I love talking about this stuff and all the ways a record can be made. All of which are completely valid. I want to be an advocate for the bands. If I don’t think I’m the best person to make a particular band’s record, I will be the first one to suggest someone else in town that is.